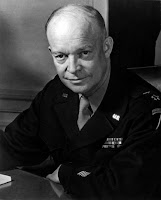 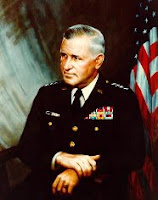 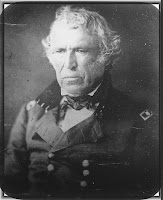 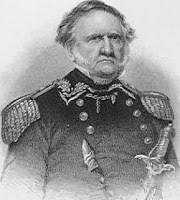 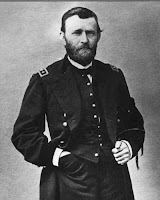 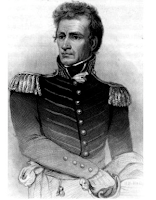 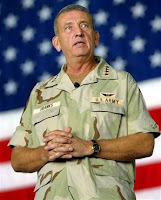 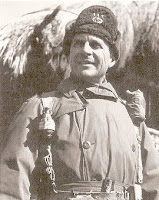 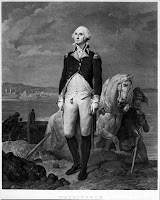 The portraits above are of generals who captained America's wars.
George Washington,
Andrew Jackson
Winfield Scott
Zachary Taylor
Ulysses S. Grant
Nelson A. Miles
John J. Pershing,
Dwight D. Eisenhower
Matthew Ridgway
Creighton Abrams
Colin Luther Powell
Tommy Franks
They all have the same thing in common. They were in charge of either winning or commanding, the decisive battle in a war. Everyone of this men justly earned the accolades of their nation and in the case all save one, continued to serve until the job was done.
This week a report was released by the Army, entitled, “On Point II: Transition to the New Campaign.” a 700 page report that calls into question the plan for Iraq after the fall of Sadam Hussein. An article in the New York Times by Michael Gordon Occupation Plan for Iraq Faulted in Army History details what the report says.
I will not attempt to denigrate General Franks here, I only make an observation that in every successful war, and even Vietnam, the General in charge stayed on duty to clean up the aftermath, or in the case of General Abrams, rebuild the Army. From a historians point of view it is something to ponder. Unanswered questions, that in hindsight led to many more deaths than necessary.
The end of World War in Germany saw horrific blood letting by victors against the German people in Eastern Europe as old scores were settled against ethnic Germans caught in reconquered territories. The Allies had several million troops stationed in Germany. A huge force was kept on to facilitate disarmament and security. In Iraq, the Army report states that recommendations to bring in a force of 300,000 men to secure the peace was rejected by General Franks.
Some of General Franks’s moves also appeared divorced from the growing problems in Iraq. Before the fall of Baghdad, Col. Kevin Benson, a planner at the land war command, developed a plan that called for using about 300,000 soldiers to secure postwar Iraq, about twice as many as were deployed.
But that was not what General Franks and the Bush administration had in mind. In an April 16 visit to Baghdad, General Franks instructed his officers to be prepared to reduce forces rapidly during an “an abbreviated period of stability operations,” the study notes.

If true, it a damning statement of over confidence and arrogance.
Asked about the decision to establish a new headquarters, General Franks told Army historians that he had told the Pentagon what was needed and that it was the Defense Department’s responsibility to ensure that the headquarters was rapidly installed.
The invasion of Iraq began on March 19, 2003 the country was declared secured on May 1, 2003. Twenty two days later General Franks announced his retirement from the Army. This in my recollection is the first time in our history when the winning general quits less than a month after major hostilities ceased. These are questions that call for an answer. Why did General Franks retire? The future is ripe for historians to discover the truth.

Army's Combined Arms Center's Web site. for a down version of the 700 page report.
Further discussion at Small Wars Journalm under the heading On Point II: Transition to the New Campaign.
Posted by HISTORYGUY99 at 6:16 PM