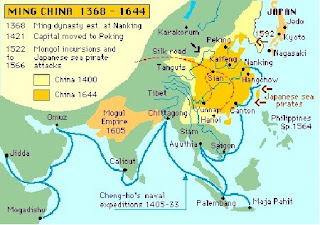 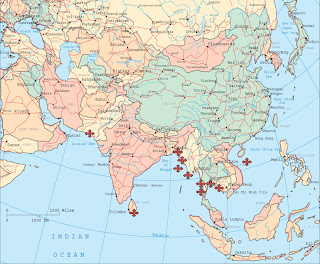 Getting back into the daily routine after three weeks of what for a historian could only be dubbed the "mischief of historians," observing and collecting impressions to sound out what I already knew of the empirical data about China. I began to catch up on some of the blog posts that really caught my eye. One post by Galrahn jumped out at me because his headline put two two of my favorite subjects on the same line.

Let's begin by looking at his revealing post although small like a keyhole, would reveal a room of fresh ideas,China and Mahan.

Galrahn took note of his conversations with another blog favorite, Tom Barnett about the rise of China's interest in seapower. He then links an article from the Naval Institute's Proceedings magazine by James R. Holmes and Toshi Yoshihara entitled, Mahan's Lingering Ghost . 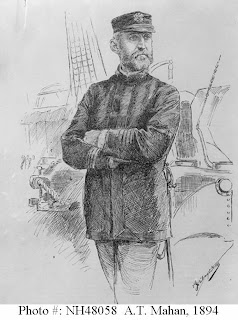 The key point of the article focuses on the real goal behind the theory of sea power by Captain Alfred Thayer Mahan. Their point is that Mahan saw maritime strategy in these terms.

Naval preparedness is the sharp edge of maritime strategy, then, but it is only a means to an end. For Mahan, commerce was the true path to affluence and national greatness: "War has ceased to be the natural, or even normal, condition of nations, and military considerations are simply accessory and subordinate to the other greater interests" they serve.17 Prosperity took precedence. The "starting point and foundation" for comprehending sea power was "the necessity to secure commerce, by political measures conducive to military, or naval strength. This order is that of actual relative importance to the nation of the three elements-commercial, political, military" (our emphasis).18

This is why nations covet access to faraway regions like Asia. In essence, commerce is about unfettered access to the means for producing wealth and national power. Reliable access is impossible without the military means to protect it, and to keep others from denying it. Mahan thus advances a tripartite concept, which we call his first "trident" of sea power. Access to sources of economic well-being-foreign trade, commerce, and natural resources-ranks first within the Mahanian trident, military access third. This cuts against the usual, military-centric understanding of Mahan.


I immediately took notice of this passage because during my recent trip I visited the Ming Dynasty Tombs, where 13 of the 16 Ming Emperors are buried. The Changling tomb of the third Ming Emperor, Yongle Emperor, has an exhibit that traces the acomplishment of this emperor, now considered one of the greatest in Chinese history. One exhibit is given prominence, and is centered to draw attention to Admiral Zheng He who under the sponsorship of Emperor Yongle led seven naval expeditions between 1405 and 1433. 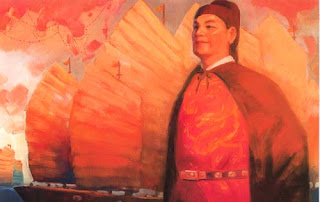 My wife said that when she was growing up in China she could not recall ever hearing about Zheng He. Her recollection was of visiting the tombs as a girl as a way of having a grasp on how old their history was, but little focus was given to any acomplishments of the ancient ones. Since 2005 China has proclaimed July 11th, Maritime Day to commerate the date of Zheng He's first voyage in 1405. 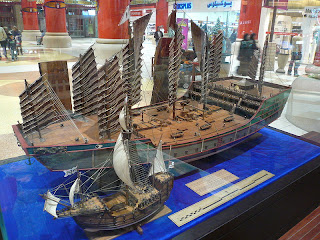 
What was the motivation for these voyages? Not global conquest or imposition of their political system on their neighbors. The goal was to support the tributary system and promote trade and commerce. Historians are somewhat divided on why China ended the voyages and imposed the Hai jin order banning maritime activities. One thing is certain, today's China appears poised for the first time in 600 years to reach a level of power equal to the early Ming Dynasty.

How does this all square with Alfred T Mahan's theory? Let us look at the Yongle Emperor's goal. He wanted to gain respect and demonstrate to those in the extended region that China was the superpower because she controlled the seas. The result, would be tribute and commerce leading to prosperity and continued "national greatness" for China. A great plan, but in a world of a belief in the Mandate of Heaven manipulated by palace Eunuchs fate deemed a different result.

Fast forward 500 years to 1905 and Captain Mahan becomes a favorite of President Theodore Roosevelt who in 1907, sends the Great White Fleet around the world to demonstrate to the world that America had arrived and would secure the seas to insure safe commerce for the United States. 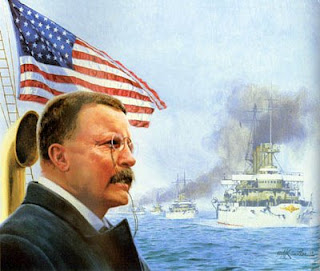 Today, it is understandable that strategists and historians in China are looking back at what could have been if they had continued to press their naval advantage. Armed with Mahan's principles of sea power and remembering the greatness that once was, China looks to ensure that this time they will protect their sources of trade and commerce in the same way that the Yongle Emperor through his agent, Zheng he envisioned. Alfred Mahan's proven strategy appears to fit nicely into China's matrix to regain what they see as their rightful place in history.

How do we Americans view China's rise and are we willing to adjust to a changing world. Recent polls conducted by the Pew Research Center has uncovered a distrubing new trend in American;s view of the world. Isolationist Sentiment Surges to Four-Decade High

The general public and members of the Council on Foreign Relations are apprehensive and uncertain about America’s place in the world. Growing numbers in both groups see the United States playing a less important role globally, while acknowledging the increasing stature of China. And the general public, which is in a decidedly inward-looking frame of mind when it comes to global affairs, is less supportive of increasing the number of U.S. troops in Afghanistan than are CFR members.


As our nation seems to be turning inward and away from a world that for many Americans is both foreign and too troubled to be of our concern it would be wise to remember some of the reasons that China turned her back on the sea and in turn the world beyond her immediate borders.

At the same time that the voyages were being financed, the Yongle Emperor was building the Forbidden City which took 13 years and 200,000 workers to complete. Other government spending far outstripped the revenues. Most of the Great Wall was built during the Ming Dynasty to protect their borders. To better serve the new capital food needs, thousands labored to rebuild the Grand Canal. With so much money going out to fund government programs the country chose to turn away from what Chinese decision makers saw as a troubled world. 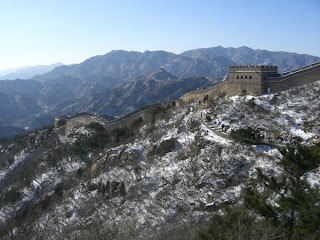 Here we Americans stand 600 years later, the strongest military and economic nation on the planet. We are overextended with massive spending programs that spread from military adventures to out-of-control social spending, coupled with bail out money spread to banks and the auto industry. The decision makers in the United States are the voters, and like the Ming emperors and their advisors, the burden of their own making threatens to contract into isolation at a time when renewing Mahan's strategy echoes from across the Pacific.
Posted by HISTORYGUY99 at 4:10 PM

That was a great read.

The United States suffers from another problem...seapower has been taken for granted. American policy-makers have been preoccupied with fighting a succession of land wars against largely landlocked opponents. Whether it be the Soviet Union or Iraq, "the Threat" has been defined as almost entirely land-based.

Whether the United States can shift directions without losing a major battle remains to be seen.

The fact remains we are a nation that happens to be a continent and if we don't remember Mahan's tenents we risk dooming our current strategic position by default.