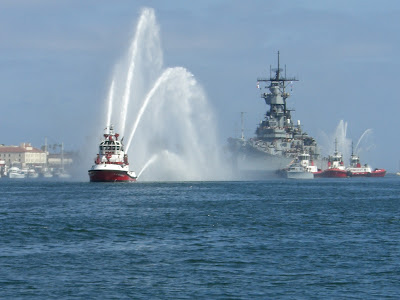 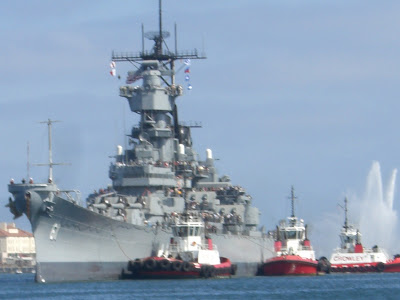 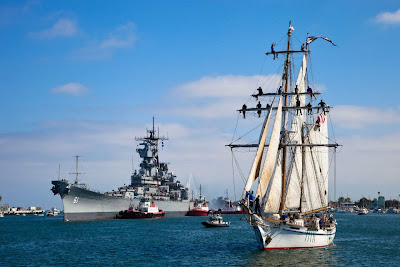 Iowa, courtesy of Port of LA photo
This week saw two events take place that will only happen once in the lifetime of living humans. One, a celestial event where the planet Venus transited across the face of the Sun and except for the media sending images around the planet, would have passed unnoticed by most of humanity. The other great event, was visible. It was the transit of the USS Iowa, the last battleship to taste the open sea as she was moved down the main channel of the Port of Los Angeles to her permanent berth, where she will assume a new mission of being a living museum and education center, serving the people of Los Angeles and the millions of future citizens who will walk her decks to learn of the great naval heritage of America. Thousands lined the main channel, and millions more, were treated to viewing the transit on their evening news reports, as dozens of reporters, supported by a half score of helicopters hovering overhead, filming every meter of the Iowa's passage.

I cannot emphasis enough, the impact seeing this great ship come up the main channel meant for those of us who know the history of the United States Navy's birth from Six Frigates, to grow into the global force we field today. This force has matured with the nation, and today, is being called upon to resume their place as the prime strategic asset, as well as "A global force for good."  Ships like the Iowa, over their lifetime rarely fired their guns in anger, but as the ship's nickname "Big Stick" implies, allowed the United States to not only speak softly; but caused nations less inclined, to become silent, and listen to our message about guaranteeing freedom of the seas, and fair trade, as well as goodwill to all nations who have joined in a partnership that has seen the world move from countless millenniums of grinding poverty, to one where half the people on the planet have achieved middle class. 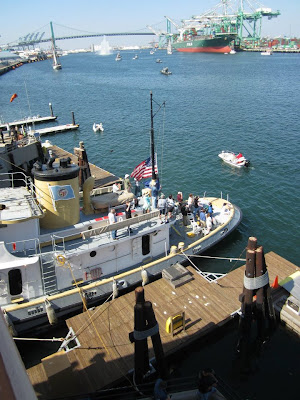 I was fortunate to view the passage from the fantail of the LA Maritime Museum's Angels Gate Tugboat where the complement reflected the diversity and interest of the community. As this  little group waited to watch the passage of the Iowa, the stories of why people turned out added to the tapestry of what the Iowa symbolized to those standing along the shore. One lady explained that she was there because her father had worked repairing Navy ships in the Bethlehem Steel shipyard in San Pedro for 40 years, only taking off two weeks in that entire time. Her father had passed, but she was their to pay tribute to the Iowa and honor her father's legacy. Hundreds of old sailors some barely able to walk, became silent, and stood at crisp attention and held their salutes as the ship's colors passed. One young man in the company of his parents, was decked out in a USS Iowa tee shirt and hat. His parents in casual conversation related how much their teenage son was interested in naval history and had actually toured the USS Missouri in Hawaii four times. My history professor genes kicked in, and we began to talk naval history, where upon this young man's knowledge was remarkable including knowing about Alfred Thayer Mahan, and how the two President Roosevelt's had been so instrumental in building the US Navy into a global force and ushering in our great power status. The young man's parents learning I was a great supporter of the Pacific Battleship Center wanted to know how their son could become involved as a volunteer. They were pleased to learn that the battleship would have both a education program as well as an overnight element to allow young people to experience the legacy of our maritime heritage. 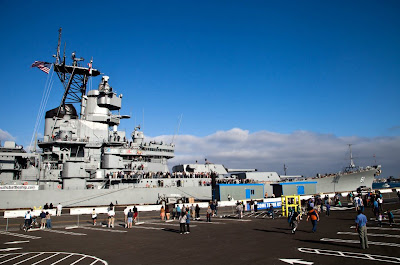 Over the next few weeks as the Iowa prepares to open, hundreds of hands will be lent to put on the final touches before she opens July 7, 2012. I have noted it before, but cannot repeat it enough to publicly acknowledge a few people who brought the Iowa to life. 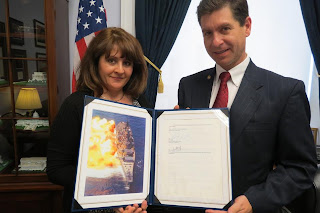 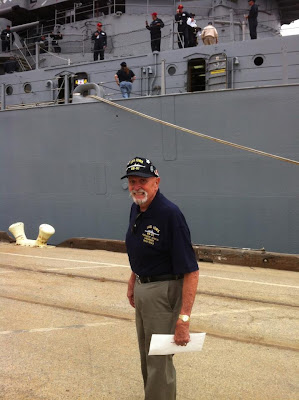 This story began when Robert Kent as a young student, was in a library and book about battleships caught his eye. That chance encounter fostered a lifelong love affair with these great ships. Later, in the middle of a successful business career, Robert did what many do when they want to follow a dream. He changed careers, and founded an organization to help preserve these great ships.

The story of how the Iowa came to San Pedro, really started when a former Iowa crew member who had served on the Iowa during the Korean War, Bryan Moss, approached Robert, and proposed that the Pacific Battleship Center go after the Iowa and bring her to San Pedro. Over the next two years, Robert organized, planned, and promoted the idea to turn the Iowa into a dream he had nurtured for decades. That dream was to open a living ship museum  that would tell the story of these great ships in a way never before done. It is impossible to name the many people who supported Robert and the PBC, in this endeavour. But one stands out, his fiancee Trish Place has been the unsung hero who has been Robert's unwavering supporter, helper, and soon to be life partner.  In the beginning, Trish was the go-to person for all interest and questions, and today, symbolizes what loyalty and love can do. To Bryan, Robert and Trish, we who love this country, and the legacy that being a maritime nation has wrought; will be forever grateful for your intrepid pursuit of the dream to bring the Iowa to life.

UPDATE: Video of The transit of the USS Iowa courtesy of Joe Buscaino, LA City Councilman