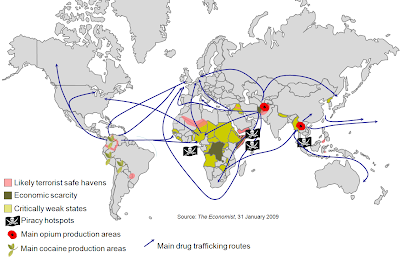 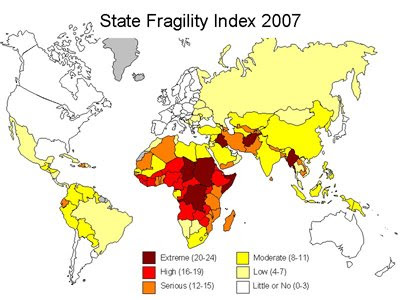 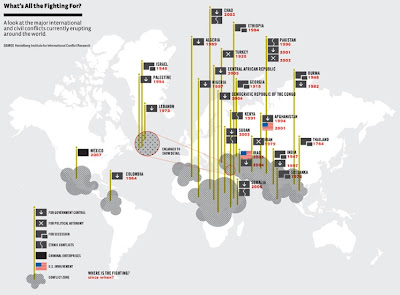 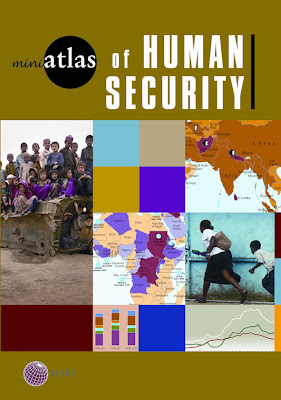 If anyone wants more evidence that Thomas Barnett's Great Powers: America and the World After Bush is on the right track in defining our world since the end of the Cold War, they only have to read Barnett's latest column where he summarizes growing evidence that state on state war has declined to the lowest levels in modern history.

Here are some of the highlights

The just-released "Mini Atlas of Human Security," published by the World Bank and Canada's Simon Fraser University, details the pacifying impact of globalization's advance. That globalization is a direct descendant of America's post-World War II international liberal trade order that has been consistently defended by U.S. military forces in the decades since, but at unprecedented high frequency since the early 1990s.

Armed conflicts worldwide have decreased 40 percent since then, with casualties decreasing by a stunning 80 percent.

Civil wars have decreased in frequency by 75 percent from 1992 through 2005, while the internationalized version of the same now stands at its lowest levels since the mid-1970s, a trend described by the report's authors as constituting the "most sustained decline in two centuries."

The Cold War was not a stable period and should not be romanticized as such by those who now try to sell us the image of "perpetual war" and "chaos" caused by some combination of globalization's advance and America's willingness to defend it with military force.

But, as the report highlights, 1992 marked "the beginning of a sharp decline" worldwide, albeit one unevenly divided between those regions with strong connectivity to the global economy and those lacking such stabilizing ties.

Here is the link to the MINI ATLAS OF HUMAN SECURITY. Take a long look, it is filled with data that at first blush makes several countries like the United State, Great Britain, France along with Russia look like the fabled Spartans for participating in the most conflicts. But if one considers that almost all of these were peace keeping missions or interventions in failed states the pattern begins to change.

Some data, is somewhat misleading. The United State is shown to be one of the countries that used child soldiers, giving the impression to someone uninformed on our laws that the United States uses children in combat on the same plane as the infamous "Blood Diamond" wars. The only way someone under 18 can join the U.S. military is if their parents give written permission when they are 17. It might be further noted that no America soldier under 18 has been killed in Iraq or Afghanistan.

Getting past those first maps will reveal the pattern that Barnett has so adeptly argued since introducing his first book, The Pentagon's New Map: War and Peace in the Twenty-first Century in 2004.

The choice seems clear. We here in the United States have two choices. We can do as the Ming Chinese did in the 15th century when based on the reports brought back from the Treasure Fleets that their empire possessed all that was needed to sustain their cultural and economic superiority and further contact would not be worth the effort. We could wall ourselves off by withdrawing from these trouble spots and erect protectionist tariffs and risk suffering the same fate as China as the rest of the world passed them by in the 19th century.
The rapid growth of globalization would not give us three centuries to see the effect of non-participation take it's toll. The second choice, is to continue to lead in concert with fellow nations, efforts to raise humanity to levels exceeding those already achieved during the past decades as connectivity and economic empowerment has led to more people on the planet living better than any time in human existence.