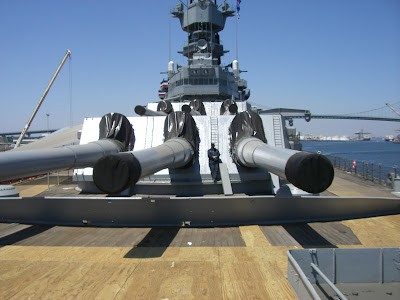 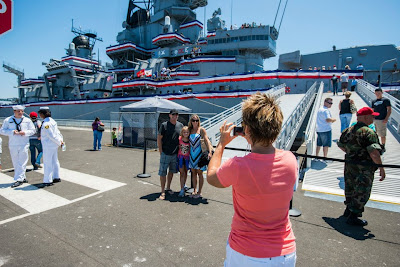 I have a confession to make. I have fallen in love, deeply and overjoyed every time I am with her. I can't wait to rush down to visit her and crawl all over her magnificent frame and marvel at her every nook and cranny. I am speaking about my love affair with the USS Iowa BB-61 now open as a museum and education center at pier 87, in San Pedro, CA. 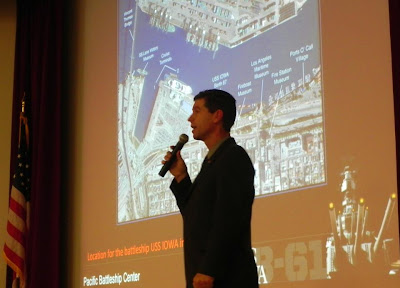 The affair began from afar, when I first became acquainted with the efforts of the Pacific Battleship Center led by Robert Kent and company, to bring the Iowa to Southern California. However, I was not prepared for what happened a few weeks ago when I first stepped aboard her wooden decks and took my place alongside dozens of fellow volunteers willing to give up days off, to grind, weld, scrape, paint, replace decks, and haul all manner of material, in an effort to get her dressed for her grand opening. I wrote in a previous post about those first days and the intrepid crew that led the volunteers who make up the ship operations division. The story that unfolded since that first post, has become more than a brief footnote in this great ships lifetime, but an ongoing journey that sees men and women falling in love with  this ship and her history.

Last week, my brother, Vince, navy veteran, and former caretaker on the USS Hornet, came down for our annual visit, and being a fellow plank owner on the Iowa, joined me in bringing her to life. Our motivation was in part to honor the memory of our father, Jay Wade, Navy veteran of World War II, who served in the Pacific throughout the war. We left the house before dawn last Friday, and queued up on the dock to be checked by the diligent security team before bounding up the gangway. We then proceeded to a berthing space/wardrobe division, where we changed to blue coveralls, and then mustered in crews mess for our safety meeting and job assignments. Our fellow crew members ranged from young high school ROTC members, veterans, retired shipyard workers, and some who never served, but soon became shipmates, as devoted as any assembled in our country's history. After getting our assignments we dispersed in small groups where within a few minutes, informal leadership was established, along with the kind of bonding that can only occur when people do jobs that involve some level danger and skill. 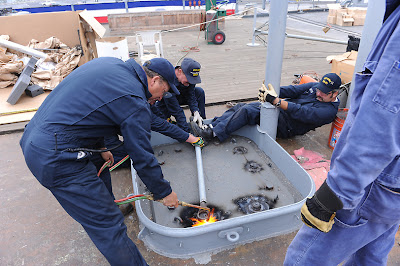 As the day progressed, the bonding became as natural as mixing sugar and cream in coffee, until the perfect blend of teamwork led to a job being completed on time, and without injury. The common thread that surfaced in working with everyone in what is know as "Ship Ops" is the joy that kept everyone hard at work as sweat stained our caps and coveralls, and empty water bottles began to be strewn about like shell casings during a "Kamikaze" attack in 1945. Being a historian and an observer of people, the breaks between assignments gave me an opportunity to learn about my fellow volunteers, and what led them to work for the sum of hard work and toil. To a man and women, they all confessed it happened after the first day they stepped aboard. Many came with the idea of working a day or two as a way to see the ship. However, for all I spoke too, seduction stepped in, as the Iowa, being the grand lady she is, caused all who grace her decks and hallowed passageways, to fall in love with her magnificent body, and the spirit one can physically sense in every compartment.

Over the next four days, Vince and I, joined with our new brothers and a few sisters, to make the ship ready not for sea; but to receive hundreds of former Iowa crew members, and for the grand opening on July 7. As the countdown continued, deadlines had to be met, welding teams worked 24/7 to prepare the new brows, and our teams scrambled to hang fire extinguishers, rig emergency lighting, repair rails and ladders, and clear the deck, so as to pass the important fire inspections for safety and security. 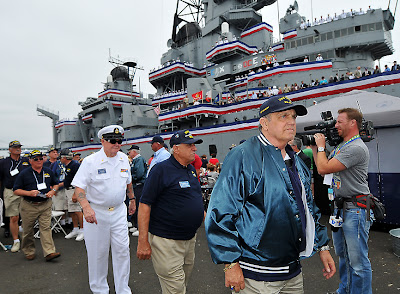 Monday afternoon July 2nd, saw the ship welcome the hundreds who had become "Plank Owners" by contributing money to fund the ship's restoration. They were joined by many veterans of the Iowa who were holding their reunion over the next few days. Those veterans showed that the love for the ship does not dissipate with time, but only grows deeper, and more moving. Old men stepped aboard, and within the blink of an eye, they became 20 again, as they returned to what for most, was the most memorable time in their lives. One fellow volunteer related taking a veteran who had been assigned to the engine room, down several decks, steadying his feet each step, as the veteran's caregiver held his arms. My fellow shipmate related that tears welled up in that old veteran's eyes when he entered the space where he entered adulthood so long ago, and for a moment, he shed scores of years as he told about working in the heat of the South Pacific so long ago. Similar images played out hundreds of times around the ship, as men showed their wives, children, and grand children where grandpa had lived and fought for his country.

For this old army veteran, it brought tears to my eyes as one realized that these men in the very twilight of their lives, sought for one more time to visit the woman who still held their first love. We who are volunteers have come to know the same feeling that inspired those men. I can not fully explain it, but here I am today making a public confession that I love that ship and cherish every moment I step aboard her historic decks. 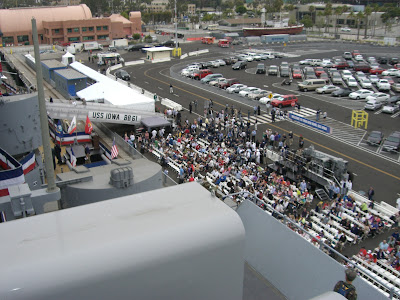 This story is continuing to unfold. When the ship opened this Saturday July 7th, over 4000 people lined up to walk her decks and marvel at the power projected in her massive 16" guns. There is much more work to be done to open more of the ship to the public. Volunteers are welcome, but beware that this lady will seduce you, and steal your heart forever. I can not say enough about the leadership of this organization, our skipper Robert Kent, and his staff. Special recognition must be given to our own Lt. Dan, who as assistant ships engineer was the ramrod and spark plug behind our daily efforts. Dan, is a dynamo, who along with Mac our CPO, used the forum of our safety meetings to remind us all in a sonnet, that this ship was a lady who deserved respect, and would treat you right if you treated her right, and hurt you if you forgot to respect her and treat her like gold. Then there is volunteer, Jim Baca who was joined by his wife Sandra, and son. Jim alone, has volunteered over 700 hours the past nine months as the ships electrician/gunners mate, and is a wealth of information on the 16" guns. His wife a former navy veteran herself, remarked that they when they found the Iowa, volunteering was a natural as when they both first joined the Navy.

There are many others behind the scene, each of whom played an integral part in bring the Iowa to life. Some I came to know, like Robert's daughter Erin, who runs the wardrobe department, and always has a kind word for all who came to help. Then there is exhibit curator Dave Way, who worked tirelessly, to take a cluttered space, clean it up, and create a informative museum that showcases the history of the Iowa, and the heritage of battleships, while interviewing tour guide candidates, and planning for future exhibits. And finally, perhaps the hardest working of all, volunteer coordinator Sue Schmidt, who often was sending email up dates, (well after the bars had closed,) just to give you an idea of the time frame of her work day, as she coordinated the thousands of volunteer applications and scheduling assignments. 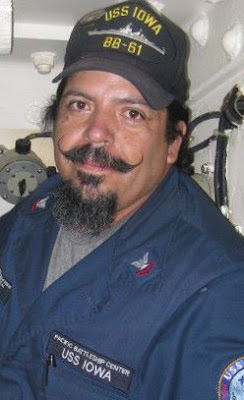 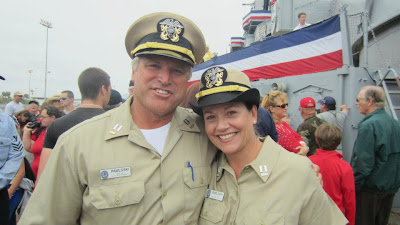 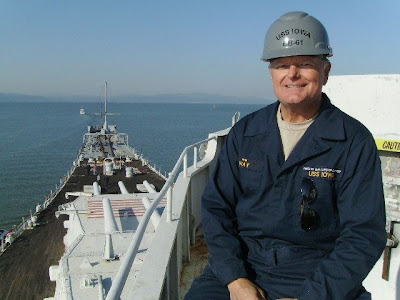 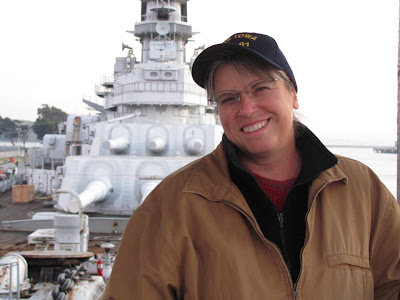 I wake every morning, longing for the chance to become a permanent member of her crew as the museum and education center become active. Until then, I will keep volunteering, and spending as much time as possible enjoying what for me, is both a time machine, a primary source for history to our country's maritime heritage, and now; one of the great loves of my life. 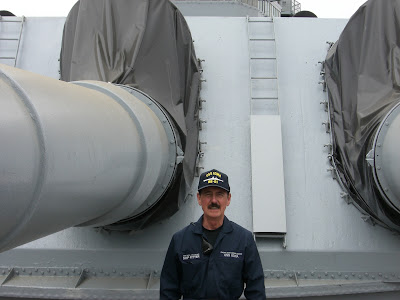 Yours truly, HG
Volunteer link
Virtual Tour of Iowa, LA Times
Posted by HISTORYGUY99 at 11:48 AM