My Own Pivot to the Sea 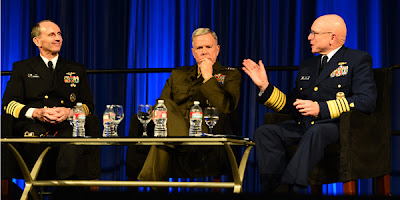 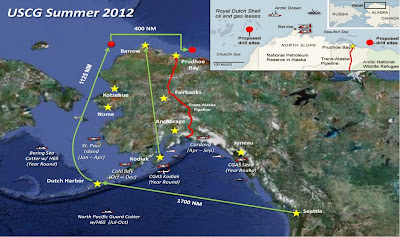 Coast Guard NSC deployment to Arctic in Summer of 2012
The focus of this blog for the past five years has often been on the ongoing efforts by our land forces in Iraq and Afghanistan as they attempted to confront a landscape that provided fertile ground for ideologies who resisted the connectivity spreading across the planet in the past twenty some years since the end of the Cold War. The efforts of the United States and her allies will have to wait the test of time to see if any worthy legacy will honor the cost in lives, treasury and the loss of focus on other areas of our security, most evident in the maritime arena.

In that vein, I am going to be devoting even more attention to our sea services and the importance of owning the legacy of being a maritime nation. I have added a heading for blog links devoted to naval centric topics and encourage all to read them frequently.

This past week I was privileged to attend the West 2013 Conference in San Diego, where I was able to attend several panel discussions and a very informative luncheon where the guests were the Chief of Naval Operations ADM Jonathan W. Greenert, Commandant of the Marine Corps Gen James F. Amos, and Commandant of the Coast Guard ADM Robert J. Papp Jr. who participated in a round table discussion of the future of the sea services. I have linked the video below, and encourage all to take an hour to listen carefully the their words.

Another, panel I attended discussed the Chinese Navy and her intentions, be they a challenge or a potential partner in maintaining safe passage for all maritime global commerce. That video is also below. 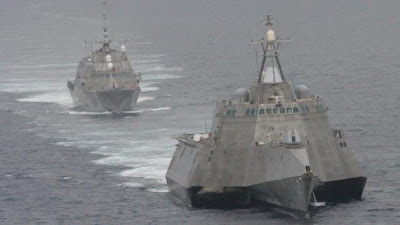 LCS's Independence and Freedom
One major naval centric blog, Information Dissemination, saw the return to frequent blogging by their astute commander, Galrahn who in this post, questions the value of the LCS class ships, and invited this guest post by Robert 'O Work the Under Secretary of the Navy. Excellent posts by both gentlemen as well a give and take in the comments sections. 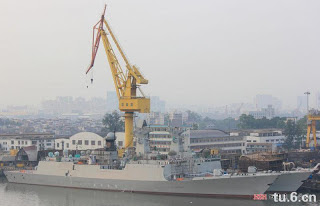 Mirroring some of the concerns voiced by the panel on Chinese Naval intentions, Galrahn posted this piece that if the Chinese take a page from FDR's Depression era shipbuilding program, will protend a fleet three times larger than today's by 2020. Galrahn concern is the following.

What does the PLA Navy look like if the Chinese decide to retain their shipbuilding sector through this downward economic period by keeping only 30 (~15%) of their major shipyards open via governemnt orders? I don't know what that would look like, but I will note that 30 major shipyards building navy ships is the same shipbuilding capacity the United States leveraged to build all warships in World War II. While no one would expect China to field ships at the same pace the US did in WWII, even if China adds orders of a single large PLAN vessel or multiple smaller vessels for 30 shipyards over 5 years while sustaining current construction pace for PLA Navy and government maritime agencies, the size of the PLAN and associated government maritime agencies could potentially triple by 2020.

Now tell me what it looks like if the Chinese government sustains 30%, or even 50% of their shipbuilding sector with government orders for PLA Navy and government maritime agency vessel orders. In theory, the Chinese government could decide to build their own 1000 ship Navy over the next 5 years by simply buying 2 ships at only 100 of their large shipyards for the sole political and economic purpose of saving the 50% of shipbuilders who are expected to go out of business over the next 2-3 years, with the very real alternative being that all those manufacturing workers become unemployed.

If this is a topic of interest, read the links. All of them. For the record, the title is a Chinese proverb that when translated literally means 'when the wind of change blows, some build walls, while others build windmills.' It is another way of saying it is better to adapt than to be stubborn. When I think about the variety of topics discussed, I thought the proverb fit, not just the Chinese but us as well.